We find Jenna at her Dad’s where she has blogged all night and has her cell phone glued to her hoping it would show some sign of communication from Jake.  She started to text him and erased it several times. Why had Jake broken up with her?  She needed answers.   Her dad asks her to come outside at the same time his answering machine picks up and “Hannah” leaves him a message.  Jenna filed that info for a later use.  She sees that her dad has bought her a car.  Remembering what Tamara told her about when your parents really break-up there will be some sort of gift. Was it over for her parents too?

Finally the long awaited text from Jake came through the cell phone wave.  Except it wasn’t exactly what Jenna wanted to read or see.  It was a picture from the other night…Matty, Jenna, compromising position – and the words:” You are are a cheater.” 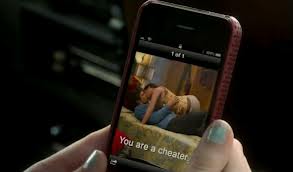 Damn that side door off the bedroom!!! I also was very please to see Jake use correct grammar – since many in the younger generation use the word “your” when it should be “you are” or “you’re.”  Not even her besties Ming and Tamara have words to help Jenna when seeing the text and Jake ignores her and walks away when Jenna tries to approach him at school.

Ming is trying to find her hook-up from Valentine’s Day, Fred Wu.  She goes to Asian Mafia Becca to see if she knows where he has been.  Becca helps Ming open her locker (she knows Ming’s combination) and tells her she doesn’t know who Jeff Wu is.  Becca gives her back her glasses that she lost and then hands Ming the answers to the geometry test.

Jenna again tries to talk to Jake – explaining how she technically wasn’t cheating (They were on a break – Ross/Rachel style.)  Jake responded that it wasn’t just about that night – he knew everything.  Jenna runs to Matty. What does Jake mean?  What is “everything?”  Who told him?  So many questions…  Matty figures out that it was Sadie and when he confronts her – she doesn’t deny it or seem to feel any remorse.  She actually can’t believe Matty isn’t pleased with her since this got Jake out of his way.  Matty can’t believe Sadie has done this.  She turns the tables on Matty by reminding him that what he and Jenna did to Jake was much worse.  Keeping such a big secret from your best friend is not the right thing to do.  At this point Jake refuses to speak to either Jenna or Matty.

In Ming’s Geometry class, she is trying to get Fred Wu’s attention but he is ignoring her.  She also got a D on the text proving she got the wrong answers.  She is confused and no one will answer her when she tries to ask them what’s up.  Later Fred Wu meets Ming in the Sanctuary where she asks him why he is ignoring her.  He tells her that he does really like her but Becca is his ex-girlfriend and she will torture Ming if she thinks they are together.  He tells Ming she should be scared. Ming has already seen the beginning of this, the bad test answers,  plus Becca switched the prescription in her glasses. 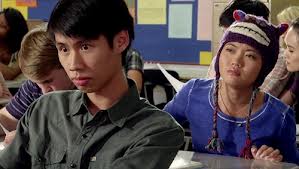 Jake is the MC at a school fundraiser and he is trying to get students to play The Wheel of Pep with Lissa and Sadie in their cheerleading outfits shaking their pom poms.   He needs a one girl and one guy volunteer. Jenna, in an attempt to be closer to Jake so she can talk to him, raises her hand. Jake tries to ignore this fact – but Sadie grabs the mic and tells Jenna to come on up. When she tries to talk to him, he then invites Matty on stage.  The tension grows and after Jake repeatedly trying to get Matty to admit to wrong doing, a punching match ensues. 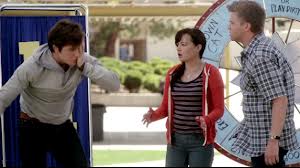 Matty and Jake wing up in Crazy V.P. Val’s office.  In her attempt to discipline, she tries to keep a score card, but per usual nothing much is accomplished.  Jenna is waiting out side the office and when they come out she tells Jake that she is in love with him and was never with Matty when they were together.  Jake asks her why he should believe anything she says.

Everyone is buzzing about Jenna and her latest situation.  She has been dubbed “Homewrecker Hamilton” for ruining her relationship with Jake, his relationship with Matty and possibly her parents marriage.  Just when she thinks nothing worse could happen, she gets to her car in the parking lot and someone has scrolled SLUT across it in paint.  When she arrives home, Lacey flips out about Kevin buying Jenna a car that says slut.  Jenna assures her the car didn’t come that way.  The purchase still makes her mad.  Lacey starts to talk about them ‘getting back together” when Jenna drops the bomb about a woman named Hannah and she is someone who is calling.  Plus he bought a car so he probably wants a divorce.

New blog post “Damaged Goods.”  Another comment pops up – she asks if the person is friend of foe.  Who is the commenter?? When she arrives at school the next day, she discovers that everyone had read her blog.  She thought this would make Jake see the truth – but instead he just feels humiliated.  Tamara screams at everyone standing around the parking lot asking who forwarded the blog around.  Jenna then admits it was her.  She crosses the street and walks right in front of a car, that slams on its breaks. Sadie gleefully screams that Jenna tried to kill herself again.

Jenna tries to stay home from school by faking being sick.  She discovers that her mother isn’t alone in her bedroom. Not only is someone in there – but it’s her dad.  The three sit down at the table and Jenna makes it clear that all of a sudden she feels better and school would be better than staying home with her parents in plush bathrobes.  Lacey gets dressed and drives her to work.  Kids are screaming bad names into the car.  Lacey thinks they are talking to Jenna, but actually they are talking to her.  Jenna quickly explains all that has been going on with Jake and Matty and how her blog went public, so people know about the letter and that she wrote it. Crazy V.P. Val get int he car with Lacey and lets her know that as a mothers he should always have Jenna’s back. I loved interactions with Lacey and Crazy Val. I hope she doesn’t stick to not wanting to be Lacey’s bestie.

The published blog is working for Ming.  Becca has now become scared of Jenna and in turn also Ming.  Jenna is suddenly at an all new level of popular.  We meet “The Julies” who have never before carried about Jenna Hamilton (they have never even been mentioned on the show before), but now one is Team Matty and one is Team Jake. Everyone is asking Jenna’s opinion on dating , fashion, advice, whatever they need an opinion on.  Tamara is enjoying this new social status as well.  She keeps hearing people quote her slanguage and Tamararisms.

Sadie is not a happy camper about Jenna’s sudden soar to popular. She can’t understand it at all.  She tells Lissa it is giving her anxiety which is causing her to break out.  Lissa lets her know that its a mouth sore on her lip, not acne.  She better let Ricky Schwartz know he gave her herpes.

Crazy V.P. Val is the sub in French class.  She shows a movie about two friends who fall in love with the same woman.  The Julies are sitting near Matty and Jake and they let them know one is Team Jake, and one is Team Matty.  After the film, the boys decide that it is time to talk.  They don’t want to end their friendship, but both admit to still loving Jenna.

Jenna gets out of class and notices that everyone in the hallway is staring at her.  She turns a corner and Matty and Jake are waiting for her.  She braces herself for what she feels is going to be some harsh words coming her way.  Instead they calmly tell her that they are not going to let a girl come between their friendship and she needs to choose.

You hear that Kelly?  You need to choose.  Do you want to marry Brandon or go around the world with Dylan?  One’s got a ring, one’s got a plane ticket. Who’s it going to be?  Whoops – wrong show, sorry…

Jenna gets home, her Mom is starting to crack from the pressure of everyone knowing that she is responsible for the letter.  The phone has been ringing all day with strangers screaming awful things at Lacey.  Jenna asks her mom once and for all – why did she write it.  Apparently the day she wrote it, Lacey’s  mom was attacking her about how she  is not raising Jenna correctly. Lacey was so upset that she repeated the bad mothering behavior.  Jenna wants to call her dad – but Lacey says no.

Matty and Jake sit down with Jenna at school which draws a crowd.  They ask her who she is going to pick.  Jake then tells her all of Matty’s great qualities and Matty does the same for Jake.  Frustrated Jenna tells them they should date each other.

Jenna and her dad are having dinner. When Jenna asks where her mom is, he dad tells her that Lacey went to bed early.  Kevin admits he wasn’t the best guy when they were younger.  He wasn’t always around and Jenna didn’t want him to hold her.  Jenna remembers him always singing to her, which he admits was a lullaby that her mother taught him, so Jenna would like to be held by him.

New Blog post:”Who to Chose and Who to Lose?” Since everyone is now reading the blog, it’s not just the one secret commenter anymore.  More comments flood in with their opinions: Team Matty. Team Jake.  Jenna decided for the night her choice is her Mom, and she crawls into bed next to her singing the lullaby.

This ending is only a half -step above Kelly choosing “herself.”