#Hashtags to use when live tweeting: #GreysAnatomy 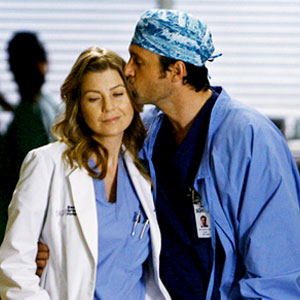 We started season 8 with Derrick and Meredith separated over her involvement in the demise of Derrick’s Alzheimer’s clinical trial.  They are hiding this separation from the adoption counselor as they are still trying to adopt Zola.  Chief Webber learns that Meredith was just trying to help his wife Adele and takes the majority of the blame to the board so Meredith won’t lose her job. She does end up getting fired.  He steps down as chief and Owen Hunt steps into the chief’s shoes.  Everyone hates Alex for ratting on Meredith tampering with the clinical trial.  He tries to explain he was just angling to get the role of chief resident, but in the end that title went to April Kepner.  Meredith gets her job back and Derrick back and after a long waiting game, gets Zola back, too.

Cristina and Owen have the biggest test to the relationship yet when Cristina finds out she is pregnant and Owen tries to convince her to have the baby.  Cristina never waivers and tries to explain to Owen in every way she knows how that she does not want to have children.  Though he physically supports her by being with her when she terminates the pregnancy, he could never get over it.  Their relationship is strained at best and he admits being unfaithful one night.  Cristina leaves their apartment.

Lexie and Jackson seem to have an easy going relationship except for the fact that she is so obviously still in love with Mark.  Jackson eventually comes to terms with this fact and breaks up with her.  Mark is dating another doctor who works at a different Seattle hospital.  Lexie and Mark spend the whole season trying to admit to each other that they are still in love with the other, but have near misses each time.

Dr. Bailey ends things with her nurse “boy toy” when she discovers that Ben has been waiting for her since they broke up.  Things progress with their relationship, he wants to move in together and then proposes marriage, only to tell her in the end he is going to go back to medical school.

Callie, Arizona and Mark are adjusting to their roles as parents to baby Sophia and we find the doctors gathering in the hospital daycare with their kids more than Joe’s bar when they first stated at Seattle Grace.  Arizona has taking a mentorship role toward Alex and is grooming him to stay in pediatrics at Seattle Grace.

Teddy is unable to cope with continuing to work in the hospital where her husband died.  Her rocky relationships with both Owen and Cristina,  affect her everyday.  In the end, she is fired by Owen and will not be returning to Seattle Grace.

The season brings our original intern class Meredith, Alex and Cristina studying for the boards with Jackson and April who joined their crew when Seattle Grace merged with Mercy West.  All are looking at different offers across the country .  April loses her virginity to Jackson the night before the test and though she is trying to deny any meaning behind the action, it seems as though Jackson has developed deep feelings for her.

Meredith, Cristina, Alex, and Jackson passed their boards, but April fails.  All of her offers are withdrawn including Seattle Grace’s.  As they are set to board a plane to help with a Siamese twin surgery we learn that Alex has taking a fellowship at Johns Hopkins, Cristina is going to the Mayo clinic and Meredith is going to Brigham in Boston.  Arizona is so mad at Alex for not staying at Seattle Grace, she won’t let him go on the trip to do the surgery and she gets on the plane instead.  Meredith, Derrick, Cristina, Mark and Lexie are also on board.

The plane crashes.  Lexie does not make it, but in her last moments of life Mark admits to loving her and wanting to marry her.  The season ended in a cliff hanger with the fates of the rest of the doctor’s on board unknown.

Season nine opens and we find Meredith is still at Seattle Grace.  She has taken on the role we grew to love Bailey in, the hard, down to business, don’t mess with me, you better be scared of me interns (One intern who is Smash from Friday Night Lights!)  They call her Medusa.  (Nazi Bailey should be proud.) Cristina did go to Minnesota.  Although we do not know the details of the plane crash, it seems Derrick has  not done any surgeries since.  He has been cleared by Callie today.   Bailey’s reputation is also polar opposite.  Now that she and Ben are in a long distance relationship – she is the doctor getting the most use of the on-call rooms (minus Karev who is back to his old ways and “making the rounds” with all the interns before he leaves for Baltimore.)  The fact that Meredith and Bailey have completed switch roles – Bailey – love sick, hormonal, and feisty, running to a private room with Ben every chance she can get, reminiscent of Meredith and Derrick in the early seasons vs. Meredith as the new, scary, no nonsense teacher is surprisingly refreshing.

Mark was critically injured in the plane crash and has been on life support ever sense.  His living will stipulated that if after 30 days he showed no signs of living on his own, to take him off life support.  We find ourselves at day 30 and Callie and Derrick are preparing to say goodbye.  There were many flashbacks throughout the episode of Mark through the years including when he was Best Man at Derrick and Addison’s wedding, intimate moments with Callie, and holding Sophia soon after her birth. The most touching was the video of his toast at Callie and Arizona’s wedding where he tells them they will still be together when their grandkids get married.  The videographer asks him about his future love life and with whom will he settle down.  He admits there is only one person for him, Lexie Grey.  (This totally reminded me of Madonna admitting in the documentary Truth or Dare, while playing truth of dare – that Sean Penn was the love of her life all of her life!)

Meredith skypes (maybe it’s facetime) Cristina on her Ipad to see if she will make it back to Seattle by 5pm.  We discover that Cristina has yet to return to Seattle to visit ever – it seems that neither she nor Meredith are able to get on a plane. Jackson visits Mark’s bedside each day, debriefing him on his patients just like he use to do.  Although Jackson is obviously a doctor and knows Mark’s fate, he still engages with his mentor for as long as he can. During his final goodbye he calls them the Plastics Posse one last time.

Owen is giving the new attending pediatric doctor a tour and introducing him around.  This is our first indication that Arizona is no longer at the hospital.  However we don’t know if she is alive or not.   Alex tells him of all the great work that Seattle Grace does with sick orphans.  He seems mildly impressed but lets Alex know that this type of work won’t continue.  It’s just not his agenda.  Callie meets the new doctor and quickly excuses herself to go cry in a supply room.  Karev arrives with the intern of the hour and at first doesn’t notice Callie in there.  Once he hears her sobbing, Callie screams for them to get out.  The intern flees – but Alex stays, even though across the room, so Callie won’t be alone.  For these reasons I love Karev!  For every scene where he is an obnoxious screw-up, there is a heart warming scene like this one that proves underneath his tough exterior he really can be a decent guy.

Derrick enters the OR for the first time and everyone claps for his return. Callie urges him to say his catch phrase – It’s a beautiful day to save lives.  Things do not go well as Derrick’s hand goes numb during surgery and he leaves the OR.  Why didn’t he just have Meredith sneaky do his surgeries like Burke had Cristina do?  I thought that was how Seattle Grace handled injured hands.

It’s 5pm and Callie and Derrick go to Mark’s bed while Dr. Webber prepares them for what is about to happen.  They remind Dr. Webber that they are doctors and they know the procedure, but Richard reminds them that this is not their patient, but their loved one.   He slowly takes the tube out and shuts off life support.  He then leaves to give Callie and Derrick privacy with Mark. Meredith shows up in the waiitng room and let’s everyone know to tell Derrick she was going to see Cristina.  This drove me CRAZY!  How could she leave Derrick as he is losing his best friend?  If the roles were reversed and she was taking Cristna’s tube out – what would she say to Derrick going to visit Mark???

Meredith sees Alex in the airport who is leaving to move to Baltimore.  She screams at him that she can’t believe he is leaving or that he wasn’t going to say goodbye.  He tells Meredith he has to take the job at Johns Hopkins.  We also see Owen run by and jump on a plane.

Callie and Derrick are still flanked at Mark’s bed as we see his heart rate get slower and slower, and eventually stop. 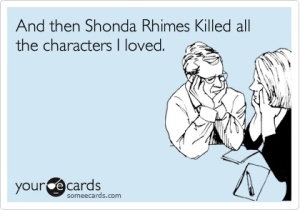 Meredith demands to get off the plane. Next she’s at Joe’s drinking and talking to Cristina via facetime/ skype when Alex walks in.  He admits that the new pediatric doctor was going to ruin everything Arizona worked so hard for so he was going to stay.  I ask again: WHERE IS ARIZONA?? He also tells Cristina to tell Hunt when he gets to Minneapolis that he needs his job back.  Cristina asks what he means and he says he saw Hunt jump on the plane at the airport so he assumed he was going to see her.

Flash to Owen on a farm where April Kepner is tending to some cows.  Owen admits to her that he made a big mistake firing her and wants her to come back to Seattle.

Callie is heartbroken when she arrives home and she flings open the bedroom door.  We see Arizona who is lying in bed with her back to us.  Callie yells that she has to get over whatever she is going through. Sophia just lost her father and she can’t lose a mother too.  Arizona in rage flips the sheets back, where we see she has no leg.  Yelling back at Callie she asks how she is suppose to get over Callie cutting off her leg.   Holy shit.  I couldn’t tell – were both legs gone or just one?

Next week:  we will finally see what happened after the plane crash.