I woke up today and made a to-do list.  So many things to get done.  Then I put down the list, turned on the TV, and curled up on the couch.  I just wasn’t in the mood to do anything!  Hey – I’m human, sometimes I throw the list away and just take a day to relax and do nothing.  I am hoping this makes me more likeable and not just some organizing freak.  Flipping through the stations, I started thinking about the different movies that I have seen a million times, but will still watch.  Most of them are romantic comedies, not always, but usually.  One of the things they have in common is the final scene.  I can repeat it word for word.  It gave me the idea for this blog post.

While You Were Sleeping

Lucy works for Chicago public transportation and loves a businessman from afar. She saves his life, he falls into a coma, she ends up loving his brother.  When Jack proposes, he tosses a diamond ring in the window for the token.

Before reality TV and confessional booths, Harry & Sally finally got their happy ending, sitting on the couch, talking about their dream wedding and the perfect cake with chocolate sauce on the side.

There are 5 minutes on the clock. Will Mr Coulson arrive in time to give Josie “Grossie” Geller her first real kiss?

Sorry I’m late.  It took me forever to get here.

I know what you mean.

Mark Darcy reads her diary and sees all of the insults she called him in the previous year. She sprints in her underwear (tiny knickers) and running shoes in the snow after him. Alas, he was only buying her a new diary.

Number of times they will shag tonight – 4.

Diane Court has won the scholarship of a lifetime in England – and Lloyd Dobler is going with her. His plans?  To be with her. If anything bad is going to happen in a plane – it usually happens in the first few minutes right after take-off.

Her Dad apologizes to her bad boy boyfriend. Rich, old folks dancing with wild dancing rebels.  She does the lift.

No one puts Baby in the corner.

Poor Samantha. Everyone around her forgot her birthday.  Except Jake Ryan.  Who cares about your sister’s wedding reception? He has a Porsche! No need to make a wish when blowing out the candles.  It already came true.

It’s Johnny Cammareri. Arriving early in the morning, straight from the airport, off a flight from Italy to call off his engagement to Loretta.  It’s a good thing Loretta is really in love with his younger brother Ronnie.

Do you love him Loretta? Mom – I love him awful. That’s too bad. 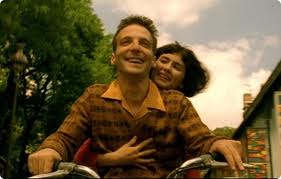 Painfully shy Amelie spends all her time making other people’s happy endings come true.  After games and scavenger hunts, she finally reveals herself to Nino – and gets a partner to ride through the city with.

An Officer and a Gentleman 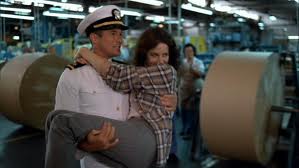 Sorry Tyler Perry, you tried to recreate the moment in Diary of a Mad Black Woman – but it just didn’t compare. Does the hometown girl really have a chance with the hot shot Zack Mayo who is attending the Navy Aviator Officer Candidate School? Many of the local girls have tried…

Are there any movies on this list that you really love? Have the final scene memorized? Will watch over and over again?  Which movies did I forget?  Leave me a comment with some of your top picks.